MITOXIC- Why Fluoroquinolone Antibiotics (Cipro, Avelox, Levaquin) may not be good for any of us, especially Mitochondrial Disease Patients 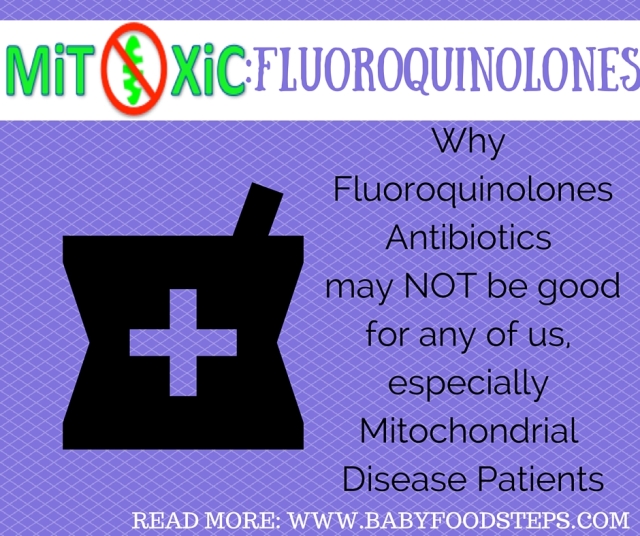 This week the FDA released some new information about a class of antibiotics called Fluoroquinolones which include the names such as:ciprofloxacin (Cipro), levofloxacin (Levaquin), moxifloxacin (Avelox), ofloxacin (Floxin), and gemifloxacin (Factive). (more info here, here, here and here), specifically:

“FDA is advising that the serious side effects associated with fluoroquinolone antibacterial drugs generally outweigh the benefits for patients with sinusitis, bronchitis, and uncomplicated urinary tract infections who have other treatment options. For patients with these conditions, fluoroquinolones should be reserved for those who do not have alternative treatment options.

An FDA safety review has shown that fluoroquinolones when used systemically (i.e. tablets, capsules, and injectable) are associated with disabling and potentially permanent serious side effects that can occur together. These side effects can involve the tendons, muscles, joints, nerves, and central nervous system.

As a result, FDA is requiring the drug labels and Medication Guides for all fluoroquinolone antibacterial drugs to be updated to reflect this new safety information. FDA is continuing to investigate safety issues with fluoroquinolones and will update the public with additional information if it becomes available.”

This topic is deeply personal to me. A few years ago, three different women I  knew, were having health issues around the same time. ALL those ladies went on to find out that they were having issues with a particular antibiotic they were being given for an issue unrelated to the major issues they were NOW having which were caused by the antibiotic.  Being the curious chemist, or maybe the nosey nellie that I am, I soon discovered they were ALL on the same type of antibiotic. One, that I myself had taken before, a category of antibiotics called Fluoroquinolones. This grouping of antibiotics includes: Cipro (Ciprofloxin), Avelox (Moxifloxacin) , and Levaquin (Levofloxacin).  Of course, not being able to just sit around and do NOTHING with this info… I dug a bit deeper into the research and, as usually happens when I do this- I was in utter shock with the truth I found there.  This post is to share some of what I have found over the last few years with you…along with the recent news that the FDA now also has found similar concerns with this drug class.

The group of individuals who have suffered from the adverse effects of this pharmaceutical call themselves “FLOXIES” and you can learn more about their reactions and recoveries on a number of their blogs:

Down the Rabbit Hole

Musculoskeletal Complications of Fluoroquinolones: Guidelines and Precautions for Usage in the Athletic Population

“Several possible mechanisms have been suggested for the toxic effects of fluoroquinolones on cartilage, including a deficiency of functionally available magnesium, inhibition of mitochondrial dehydrogenase and proteoglycan synthesis, altered DNA metabolism (through inhibition of DNA polymerase), tissue accumulation of fluoride, and increased ROS production in chondrocytes.”

“Part of the problem is that fluoroquinolones are often inappropriately prescribed. Instead of being reserved for use against serious, perhaps life-threatening bacterial infections like hospital-acquired pneumonia, these antibiotics are frequently prescribed for sinusitis, bronchitis, earaches and other ailments that may resolve on their own or can be treated with less potent drugs or nondrug remedies — or are caused by viruses, which are not susceptible to antibiotics.”

FORBES- Antibiotic Alert: The Drug The Doctor Ordered Could Cause Deadly Side Effects

“The statistics on adverse reactions to Cipro, Levaquin and others aren’t considered complete because of the way the FDA’s database is constructed; the FDA considers its system to reflect about 10 percent of the actual incidence. Even so, there have been 2,500 documented deaths resulting from the major quinolones and 45,000 cases of side effects.”

But all that changed suddenly after she took a prescription drug called Levaquin to prevent infection following routine sinus surgery. Wilcox developed severe pain in her joints and muscles, and even when she stopped taking the medication, the symptoms grew worse, until she could no longer walk.

And just some of the MITOCHONDRIAL RESEARCH and connections I have found:

www.EmpoweredAdvocacy.com Pediatric Patient Advocate
View all posts by Empowered Advocacy →
This entry was posted in transfer. Bookmark the permalink.